Advocacy for the promotion and protection of lesbian women's human rights forms part of all our projects within the Women's Leadership Centre, as well as our efforts toward building an inclusive feminist movement in Namibia. 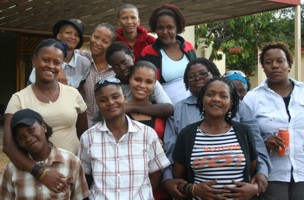 In addition, we reach out specifically to lesbian and bisexual women through writing workshops to ensure that their voices are included in our anthologies.

Our project: Lesbian women claiming CEDAW has introduced lesbian and bisexual women from across Namibia to the United Nations Convention on the Elimination of All forms of Discrimination Against Women (CEDAW), and together we are currently conducting research on the situation of lesbian and bi-sexual women for a CEDAW Shadow Report to the CEDAW Committee at the UN.