Speaking for ourselves - Voices of San young women

The indigenous San peoples are the most marginalised and socially excluded group of people in Namibia today. Most San communities are struggling for sheer socio-economic survival, as well as to maintain traditional livelihoods, knowledge, skills, languages, customs, values and histories, and thereby their unique cultural heritage and identities.

The extreme levels of poverty, racial and ethnic discrimination and limited access to services and infrastructure have led to the basic ties of support, reciprocity and solidarity breaking down in these communities, resulting in a general sense of distrust and lack of purpose and prospects.

San girls and women living in Namibia today experience multiple layers of discrimination and oppression based on gender, race, ethnicity, indigenous status, language, class, age, education and geographic location. The situation of San young women in core areas of social life, such as education, employment and health, is worse than that of young women in other ethnic groups of Namibia. The inequalities they experience can be seen in their extreme poverty and geographic isolation; lack of land, resources, services and sustainable livelihoods; high levels of violence; high rates of TB, HIV and Aids; high levels of illiteracy in their indigenous languages as well as in English; early marriages and motherhood with high rates of maternal and child mortality; incomplete formal education and the lack of further education and vocational training opportunities for San young women.

The objective of this programme is to foster self-knowledge, self-awareness, cultural pride, voice, visibility, feminist leadership, sisterhood and solidarity among San young women from diverse communities across Namibia, and to facilitate their influence in the social and political spheres through engaging in advocacy on issues affecting their lives with key stakeholders at the local, regional and national levels. We currently work with Khwe, Hei||om, !Xung and Ju|’hoansi young women’s groups in Kavango East, Otjikoto and Omaheke regions.

ACTIVITIES AND ACHIEVEMENTS IN 2019

During 2019 our focus in this programme was to conduct participatory research for a CEDAW Shadow Report on the situation of San women in Namibia, which will be finalised in 2020.

CEDAW is the UN Convention on the Elimination of All Forms of Discrimination against Women, to which Namibia acceded in 1992. Our state is obligated to report to the UN CEDAW Committee every four years on progress and challenges with regard to implementing this convention, and civil society organisations are invited to submit socalled shadow reports to this committee and other UN human rights committees. In 2014, WLC staff submitted a CEDAW Shadow Report on Harmful Cultural Practices in Namibia, which was circulated to other committees and resulted in specific recommendations to Namibia from four UN human rights committees.

In June 2019 we conducted a national five-day workshop: Looking Back – Looking Forward in Windhoek with 18 San young women leaders from 9 villages located in three regions of Namibia. The training was facilitated by the WLC director Elizabeth |Khaxas and the programme officer Nadia April, with training materials based on extensive desk research by Elizabeth on the heritage and values of San people. Topics covered looked at decolonisation, different world views and cultural values, as well as historical tracing of San peoples’ development and way of life. The workshop explored indigenous cultural values, and knowledge creation through story telling as a method for the collection of data for the CEDAW shadow report. This was combined with training on CEDAW, and planning by the community leaders on how to collect stories on the various articles of CEDAW in their communities. 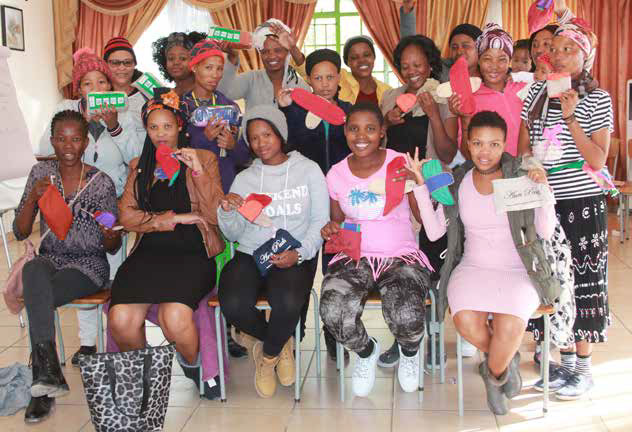 2.2 COLLECTING RESEARCH STORIES IN THE VILLAGES

Following the training workshop, the community leaders held ten local meetings with their women’s groups to start collecting stories, with an average of 18 women attending the meetings. The community leaders also made followup meetings with some of the storytellers to gather more information. Altogether 376 stories were collected in the nine villages, some documented in English and some in Afrikaans, which have now been translated. A draft report will be shared with the community leaders for collective analysis during 2020 before the CEDAW shadow report is finalised and submitted. We will also submit the report to relevant AU and SADC committees, other human rights  UN committees, as well as duty bearers in Namibia and the media.

This programme really grounded me in refocusing the reasons why we do the work we do; reading through the stories brought me closer to the realities of the women we work with, and the level of oppression and discrimination they face. It frustrated me how much discrimination is perpetrated by state institutions that are put in place to actually protect and advance communities. This gave me a sense of how far we are with the women’s rights movement in the country and how much we still have to do.
Nadia April, Programme Officer

During the training week we created an advocacy space for the San young women leaders through hosting a public dialogue with political parties, in view of the national elections held in Namibia in November 2019. The event was held in collaboration with the Namibia San Council and was attended by Namibia’s Ombudsman, Advocate John Walters, representatives of political parties, trade union representatives, other partners of the WLC including the Legal Assistance Centre, the media and the general public. Even though there was a low turn up of political parties and media, the group was not discouraged and used the opportunity to engage with the representatives present.

Members of the San Council and the young women leaders spoke out strongly against being labelled ‘marginalised’ and called for the closing of the Department of Marginalised Communities in the Office of the President, which is tasked with supporting the development of San communities.

The existence of that department is killing us. Public servants from other government agencies refuse to assist us if they see that you are a San person - they just send you to that Office of the Marginalised, whose staff does not support us at all. No one wants to help us as fellow Namibians, and any issue that you bring forth is just referred to that office, where you don’t even get helped. Don’t call us marginalised anymore!
Maria Garises, Drimiopsis

For tertiary students, the Office of the Marginalized is failing them. Their allowances come late, exam fees are not paid on time, and many drop out and return back to their villages with their hopes of a good education defeated.
Kileni Fernando, Namibia San Council Coordinator

2.4 EVALUATION MEETING WITH THE COMMUNITY LEADERS

In November the group came together again in Windhoek for a two-day evaluation meeting. They brought the stories they had collected, and reported with pride on their achievements as researchers in their communities.

For so long people came into our land and gathered knowledge from us. It’s time San people are owners of our own knowledge.

We also used the meeting to conduct an evaluation of the whole four-year project funded by the Olaf Palme International Center, which was coming to an end. The community leaders shared challenges and achievements from their communities on the personal, social and political levels. The women reported how they have gained personal growth and knowledge, as well as social standing in their communities.

We are no longer just community leaders of the WLC but facilitate and attend meetings and workshops for other organisations. We are invited to government events, and advocate for and represent our communities on various platforms.
Maria Garises, Drimiopsis, Omaheke Region

We are human rights’ watchdogs in our communities, and advocate on behalf of our people. We work closely with police officers and nurses and the community members bring us any problems they have and we go report the cases.
Patricia Dinyando, Omega 1, Kavango East Region

Maria Garises is the vice-chair of the Drimiopsis Development Committee and I am the treasurer. We were also elected onto the school board but resigned after the backlash that followed the protest we led against the violence experienced by our San children at the local primary school.
Josephine Stuurman, Drimiopsis, Omaheke Region

At the 2018 Regional Dialogue with government leaders, organised by the WLC in Gobabis, I spoke out strongly on the education needs and capacities of San children and youth at our village. My chief was present, and soon after he appointed me as a traditional leader for my community.
Francisca Barase, Corridor 17, Omaheke Region

We are in the process of compiling a report on the four years of this programme: ‘Speaking for Ourselves – Voices of San Young Women’ to reflect back to the women their personal.