In Namibia, the hate speech articulated in particular against lesbian activists by ruling party leaders in the years 1995 – 2006, led by then state president Nujoma, is still deeply embedded in the psyche of many families of lesbians as well as among political and religious leaders and staff of state service providers. The humanity, dignity and rights of lesbian women become erased through homophobic prejudice and abuse.

The silencing of lesbian women through stigma, discrimination, social exclusion and all forms of violence and abuse leads to fear, isolation, invisibility, loss of voice, loss of creative power and agency, and internalised homophobia which may result in depression, self-hate and self-harm. In this way young lesbians are excluded from participating in shaping the vision and future of their country.

In this programme the WLC uses creative forms of expression including writing, spoken word, story telling, dance, drama and music as tools to build resilience and resistance to stigma and discrimination through increased  selfknowledge, voice and visibility. Working together to create public performances builds the courage, pride, sisterhood and solidarity of the participants.

This programme contributes to the implementation of the National Human Rights Action Plan developed under the auspices of the Office of the Ombudsman – Namibia’s human rights watchdog, and adopted by Cabinet in 2014. This plan includes public education and awareness raising on the rights of LGBTI people in Namibia. 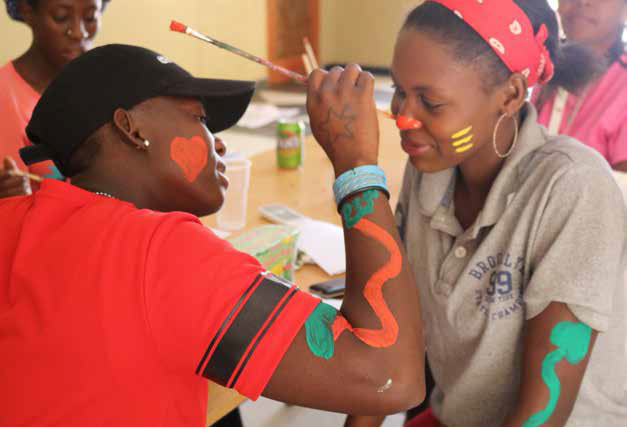 The objective of this programme is strengthened feminist critical analysis, transformative leadership, visibility, voice, courage and solidarity among young lesbians in Namibia, and increased awareness of the dignity and rights of young lesbians among their communities and the general public.

ACTIVITIES AND ACHIEVEMENTS IN 2019

During 2019 we conducted four major activities in this programme: a Feminist Leadership Institute; a public panel discussion on Feminist Futures; five regional creative writing and art workshops; and the Namibian Lesbian Festival 2019, which included a creative performance workshop and a public performance.

The five-day Feminist Leadership Institute (FLI) was a festival of learning and creativity, to which we invited community leaders from the San young women’s programme and the Zambezi women’s rights programme to join the young lesbian leaders from various towns who formed the core of the institute.

The themes of the institute were designed to build on each other each day, moving from CARE: self-care and community care; to DREAM: reconnecting with our ourselves at a deeper level; followed by RESIST: exploring our ‘power within’ – resilience, and ‘power with’ – solidarity and sisterhood to exercise our ‘power to’ resist, BUILD and ORGANISE. We had a professional young woman leading the CARE sessions throughout the week, and our facilitator Dawn Cavanagh guided the WLC team of junior staff and community leaders to lead the other sessions as a method for capacity building and intergenerational transfer of knowledge and skills.

“To me, the importance of self-care and radical self-love became real.

I am now very aware of the importance of us as feminist activists actively caring for each other.

The space opened a gateway for my dreaming.

The amount of power within us to be able to resist and speak out about any situation!

I enjoyed the writing exercises about all the ways I’ve resisted, and dancing to resist was lots of fun.

I have learnt how to build connection with different people of different cultures and tribes, and how I can mobilise my community and organise ourselves towards building a movement.

On one evening during the FLI the young feminists from the institute gathered at the Kalahari Coffee and Jazz Café  in Windhoek in a public conversation to think and share ideas and our passion for “Creating Feminist Futures with and for the Next Generation”. Our panellists were Dr Lucy Edwards, Senior Lecturer, Sociology Department University of Namibia; Dawn Cavanagh, feminist activist from South Africa; Florence Khaxas, Director of Young Feminists Movement Namibia; Julia Hango, multi-media activist, artist, body positive activist and wellness coach; and Mimi Mwiya, WLC Zambezi for Women’s Rights Programme Officer. The panel was moderated by Irene //Garoës, country coordinator of One Billion Rising Namibia. The space was packed with activists, artists, academics and interested members of the public, and the vibe was alive and charged.

The presentations were followed by robust discussion and debate, and there was agreement that this kind of public engagement from a feminist perspective was missing in the country. The WLC was congratulated for creating  this space and asked to organise more of these events to build the public debate on power, privilege and feminist futures. 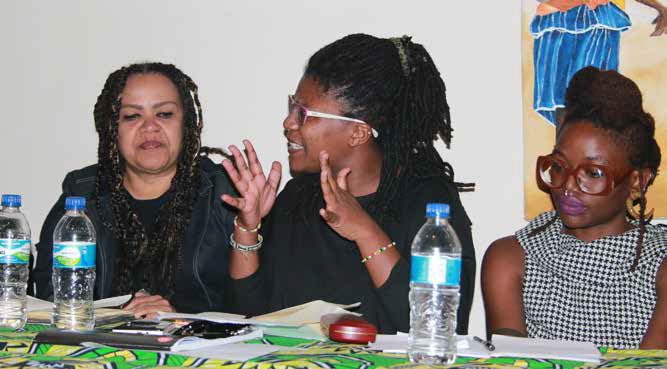 Themes such as heartbreak, lesbian erotica, analysis of power, love, mental health, abuse and more were discussed to guide the process of self-expression, unpacking multiple forms of discrimination and homophobia. Many stories were drafted and are now being edited for the anthology. These local activities also served to increase sisterhood, solidarity and leadership among young lesbians in their communities.

Today I believe everything is possible and I am very happy to be here to learn. I feel alive inside and I want to thank everyone who came, all the happy smiles in their faces. I feel myself now. I loved the warm and loving conversations we had and the things we spoke about were so inspiring. The topics touched me deeply. I learnt new things about violence and toxic masculinities, also about violence and abuse within LGBTIQ communities, and about respect we need among each other. I learnt to speak out for myself, I actually enjoy stories, its lekker! I hope we have more workshops such as this. Thank you WLC!

Through the anthology we will further strengthen pride and visibility, as well as create new social and cultural space for celebrating the richness and diversity of lesbian experiences from across the country.

Since the first Namibian Lesbian Festival in 2017 this activity has been embedded in feminist understandings of agency and power, and has employed various forms of creative expression as tools to strengthen the selfknowledge, self-esteem, voice, visibility, courage and pride of young lesbians. The festival consisted of a three-day creative performance workshop culminating in a public performance at the Franco Namibian Cultural Centre on the last evening.

From the previous five writing workshops, 25 young lesbians were selected from 7 regions in Namibia to be part of the festival. The festival organisers were WLC community leaders Irene //Garoës and Verona Johannes, with professional support from Mel Mwevi for theatre and bringing the whole show together, Toshi Haufiku for music and Hillary Shiimi for dance. During the three-day creative performance workshop, the group combined spoken word poetry, theatre, music and dance into a powerful public performance.

I want to thank all the amazing souls that made sure that my first performance wasn’t a flop and held my hand even when I thought I could not do it… thank you.
Madden, Walvis Bay

I really had fun but next time can we have the workshop for two weeks at least to make the whole festival more perfect.
Zelda, Windhoek

Thank you WLC for always creating this space for us… we cried, sang, danced and laughed together.
Hesther, Oshakati

The festival once again created a platform for visibility of young lesbians to express themselves through arts, using this space to explore how the personal is political and express unity and solidarity among each other. The venue at the Franco Namibian Cultural Centre was packed with a supportive crowd.

Tonight’s event was beautiful, it was an amazing space. Everybody come together in a way that I have not seen in Windhoek in a very long time, particularly as a women-identified space - it was powerful.

The festival was very informative, it was nice to see people to be proud of who they are and express their feelings about how they experience being lesbian here in Namibia, it was amazing.

Local filmmaker Hildegard Titus captured the event on video, which will be used for visibility purposes. Through all the above activities we achieved our objective of strengthened feminist critical analysis, transformative leadership, visibility, voice, courage and solidarity among young lesbians in Namibia, and increased awareness of the dignity and rights of young lesbians among their communities and the general public in Namibia.